We all hear, and most of us say, that the pace of change in healthcare is quickening.

That means that the pace of required decision-making is increasing, too. Unless, that is, you want to take the “default” route. That’s the one is which you let someone else make the decisions that impact you; you’re just along for the ride.

Of course, playing a bit part in scripting your own future isn’t the smart route to stardom.

But despite your own best intentions, perhaps it’s your medical group’s governance structure that’s holding you back. Is the problem systemic?

Here’s a simple four-quadrant diagnostic tool to help you find out. I call it The Medical Group Governance Matrix™. 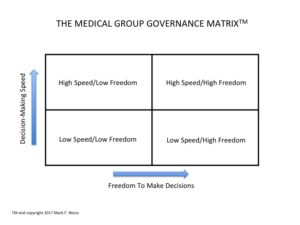 This, unfortunately, is the domain of far too many medical groups.

Usually, they have one of three governance structures:

These groups take far too long to make decisions. And, the decisions they make are watered-down, either by the need to obtain formal buy-in (in variants 1 and 2) or to obtain consensus. Neither quick nor bold action is welcome.

These groups take longer to make a decision than it takes to turn a cruise ship. Consider the group that told me that all of their shareholders had to meet to approve a decision to consider, not even to commit to, expanding its business to other sites. When would they meet? Not until after summer, when everyone was back in town from their vacations!

No single leader or small group of leaders is granted freedom to fail because no such individual or individuals are allowed to make decisions.

These groups have either a small management committee/board or a solo leader.

Conceptually, the leaders could make and implement quick decisions. However, their decisions are continually second-guessed. This can take the form of criticism or even active resistance.  The leaders are blamed for their “poor decision-making” and quickly catch on that it’s not in their interests to stick their heads out. Maintaining the status quo receives the highest kudos.

I once represented a significant size group with a small board of directors and a president empowered to act. However, the culture of the group was such that the president’s decisions, notably in connection with the strategy relating to the renewal of the group’s exclusive contract with a large hospital, were “double checked” by a significant number of the rank-and-file members.

That resulted in a back channel from within the group to hospital administration. The results were not pretty.

These groups have large management committees/boards, sometimes consisting of dozens of members.

They might even also have a corporate-type structure with officers; however, they are restricted from taking action except as authorized by the board.

From the perspective of the group as a whole, those “leaders” are completely free to lead, even to fail, as long as they are in office. If they don’t perform over the long term, then they’ll be voted out of office.

From a freedom to lead perspective (which is really what freedom to fail is), these groups are champions. However, their oversize boards prevent quick decisions.

The management committee itself struggled with decision-making. They delegated fact-finding to sub-committees. Meetings lasted hours because everyone wanted to put in his or her 2-cents’ worth even if they had nothing to say.

Their likelihood of bright success was tarnished by the participatory and overly cautious nature of their decision-making process.

These groups have either very small management committees/boards or a fully empowered “strong leader.”

The best way to describe this in everyday language is to say that even if the legal structure of the group is a partnership, the governance structure is fully corporate: The leadership is either institutionalized via the governing documents or is elected on a periodic basis. The group doesn’t have the right to overturn management decisions and the culture of the group is not to interfere with the leadership’s decisions and to fully support their implementation.

Of course, if the structure includes periodic elections and if the group loses faith in a leader, then he or she is voted out of office.

The Takeaway For You

The object is to move your medical group’s governance structure into the upper right quadrant if your group wants to be able to best position itself in today’s market.

Of course, some groups view that goal as having less value than others, such as maintaining its club-like structure. As long as that’s a conscious decision, made with an understanding of the trade-off, then its perfectly valid. That is, as long as you don’t expect both more-or-less complete personal autonomy and a serious competitive position for the group.

If not, what are you going to do about it?