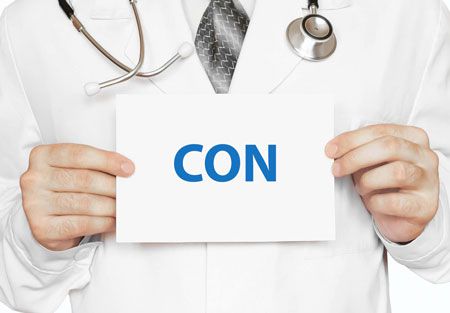 Chalk up a victory for less care at higher prices. Hey, aren’t those two of the Anti-Triple Aim?

Maine is a Certificate of Need (“CON”) state. Want to build a new ambulatory surgery center to provide better care than a hospital at lower prices to patients and payors? Well, in Maine and other CON states, it is not so easy. You need permission from the state and from your competitors, a so-called Certificate of Need.

Earlier this month, the state’s CON board recommended against approving an application submitted by Central Maine Healthcare to build a $14 million, 20,000 square foot ASC in Topsham, a town outside of Portland. In opposition was a competitor, Mid Coast Parkview Health, a health system that includes a hospital and an affiliated physician group.

Why the “no” vote, you might ask? Because, in the world of CONS, competition is bad. Somehow, in the rarified air of regulatory ridiculousness, reminiscent of the former USSR, top down is the way to keep prices low. Or, is it to keep prices up?

Let’s say that instead of being in the health care business, Central Maine and Mid Coast ran competing chains of supermarkets. Central Maine decides to build a new store across the street and down one block from Mid Coast’s Topsham market location. Once they open the new market, do you think that prices for potatoes and pickles are going to go up in Topsham or down?

Please don’t interpret this the wrong way if you are a public “servant”: I know that food is a bit more essential than healthcare, and I am not trying to plant the idea that you need to regulate whether someone can open a new supermarket.

CONs are simply a variant of “I’ve got mine, you can’t have yours.” They never served a useful purpose and they certainly don’t serve one now. In essence, they are a con on consumers.

Or, as an activist might put it: “How many people have to die before the CON system is put in the grave?” OK, it is a bit over the top . . . but you are free to use it.